We are delighted to announce that our Spring Equinox beer and cider festival returns in March 2022, at the Drill Hall in Horsham on March 18th and 19th. Tickets can be bought online via the following link https://www.eventbrite.co.uk/e/218319157477 or from various local pubs as per the poster below. Please note that we will be re-using existing stocks of glasses this year, rather than producing a new festival glass. Also restrictions may apply to the free pint available to CAMRA members at the event on presentation of their membership card. If you would like any further information, please email the festival organiser at moc.liamg@xoniuqe.armac We hope to see you at the Drill Hall in March 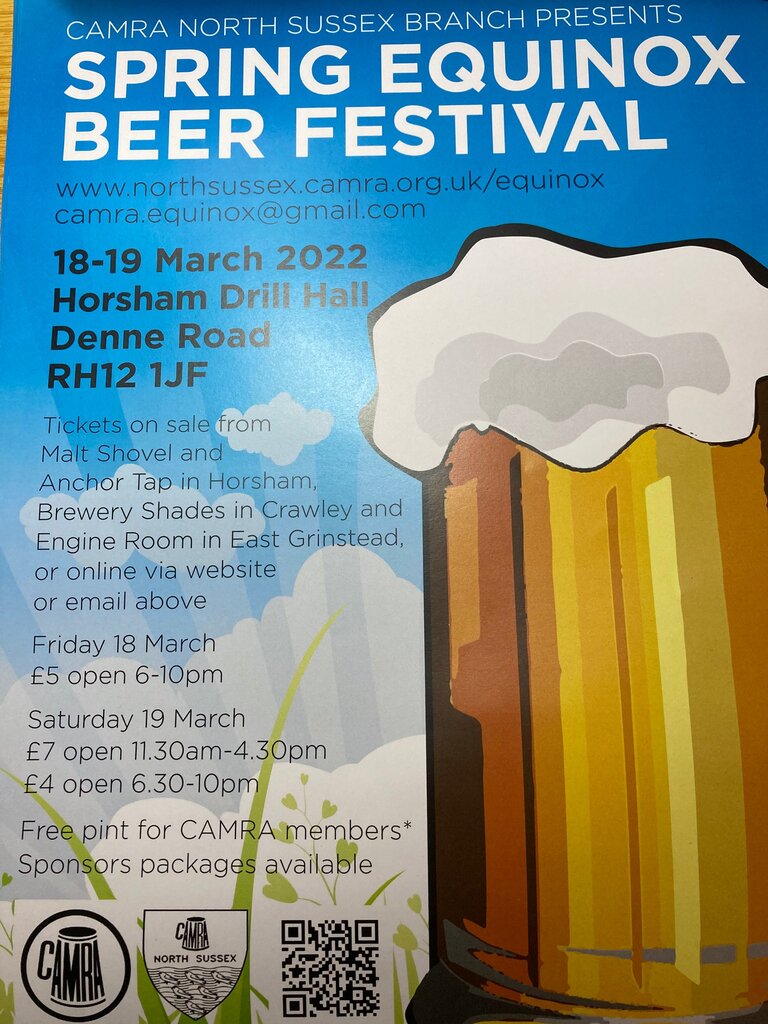 6. Hand Brew – Tamper Man Cold Brew Porter 5.2% Worthing LocAle With added cold brewed coffee from their local coffee shop, Twin Pines, this beer is all about the coffee and caramel sweetness we love in Porters. Allergens: To be advised

15. Thames Side – Ruby Brewsday 4.2% Staines Rich and malty dark ruby mild, with a light hoppy bitterness and chocolate notes on the finish. Allergens: Gluten from wheat and barley.

22. Allsopps – IPA 5% Sheffield Brewing restarted in 2021 after a 62 year gap. A classic IPA with grass and spicy notes and a hint of caramel before a dry, lingering finish. Allergens: Gluten from barley.

27. Chiltern – Chiltern Pale 3.7% Aylesbury A light, quaffing ale with a creamy smoothness and a refreshing, cleansing finish. Allergens: Gluten from barley and wheat

30. Firebird – Parody 4.5% Rudgwick, LocAle The big malt base of this amber ale acts as a great foundation to a storm of modern and traditional hops yielding powerful bitterness, huge aroma and a long satisfying finish. Allergens: Gluten Free

36. Horsham – Dirty Denne 4.2% Horsham LocAle A session IPA with apricot and peach flavours followed by a well-balanced bitter note holding on the palette until the finish. Vegan. Allergens: Gluten

37. Iron Pier – Perry St Pale 3.7% Gravesend A session pale, brewed with Amarillo, Centennial and Simcoe hops, with an up front hit of orange rind and grapefruit in the finish. Allergens: Gluten from wheat and barley

41. Quantock – Wills Neck 4.7% Somerset A late hopped golden ale with chinook and cascade hops, with tonnes of aroma and flavour. Allergens: To be advised

52. Brew by Numbers – Organic Lager 5.2% Bermondsey This, their beer number 30, is a rustic-style lager brewed with organic extra pale malt, wheat and Opal and Tradition hops. A clean, floral and herbal aroma and a spicy finish. Allergens: Gluten from barley and wheat.

54. Horsham – Ale Be Back 4.2% Horsham, LocAle Brewed by the Horsham Homebrew club in collaboration with Horsham Brewing Co, this is a Californian Common style beer, with a moderately rich malty character and dry finish with flavours of bread, caramel and slight graininess. Allergens: Gluten

56. Pentrich – Sunshine Thief 5.6% Derbyshire Hopped exclusively with Mosaic to give Juicy citrus and berry flavours at the fore with a gentle bitterness on the finish. Allergens: To be advised